Here’s an interesting fact folks: Venus (the planet) has a weird rotation pattern: its year is shorter than its day! So in other words it takes it more to spin around its own axis than it takes the planet to actually make a full rotation around the Sun in its own orbit.

Now imagine venusians talking to each other:

Or try to figure out what would a Venusian calendar look like? How the f… do you actually print it? Do you print a new one every week? (Even the idea of “week” is a bit difficult to imagine on Venus!)

How does their TV channel predict the weather?

“Dear viewers, the weather today looks snowy in between 8am and 11am but then we will be moving out of winter and summer will be here folks about 2pm!”

Even worse, you probably wouldn’t dare going to sleep cause you’re going to lose a couple of years every night!

So if women are indeed from Venus, no wonder their world is different than ours — it’s backwards! 🙂 Does the answer 42 ring a bell to anyone? 🙂

Only borrow from pessimists -- they don't expect to be paid back. 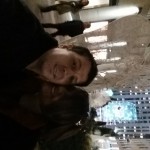