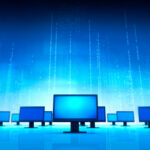 I’ve dealt in previous posts (here and on Cognitive Match‘s blog) with JMX and various things around it — as this is an area I have found more than useful in the JDK. It is therefore no surprise that recently I have turned my eyes to Apache Commons Modeler. The project lacks documentation, granted, and sometimes having the sources helps more than the JavaDoc (sorry, guys!) but nevertheless it is actually a handy tool. I am only guessing the reason why the project hasn’t maybe got the popularity it deserves amongst developers is because of Spring JMX — which in fact does pretty much what the Modeler does, however, there’s lots of developers “hooked” on Spring.

At the core of Modeler is the ModelMBean interface — for those of you unfamiliar with this, it allows a developer to wrap up any old Java class into an MBean which can be then managed via normal JMX means. In other words, you can take any class you want to export to JMX and without changing your class, without your class even “knowing” it’s going to be JMX’d, you can do so — by the usage of a ModelMBean!

Unfortunately, for those of you who tried to use a ModelMBean — in fact same for DynamicMBean — the interfaces for creating these and defining the metadata for each bean can be quite clunky and awkward at times to use. I thought in the past, when working outside the Spring framework, that it would be so good to have a way to just say “here’s my class, a standard Java class, not aligned to any JMX naming conventions or anything — please register this somehow with JMX so I can inspect data through JMX Console”. And as I said, recently I discovered this is possible through Commons Modeler. (For those of you who like self-flagellation through the hand-crafting of code required for to support a ModelMBean though, have a look at this page here : http://marxsoftware.blogspot.com/2008/07/jmx-model-mbean.html .)

Let’s start with a very simple bean — you would have encountered this in some of the other code samples on my site: JacksMagicBean:

Now as you can see, there is nothing special about this class — just a simple Java bean. You could use a JMXBean I suppose to define an interface and have this JMX’d — but this introduces another interface and makes (to me at least) the code less readable.

Or you can use a piece of code like this (look at registerBean function):

If you run the attached code and inspect it with JConsole (I’ve put a few “breakpoints” in the code, so the program stops waiting for user input in the console, giving you time to look at JConsole) you will see that auto-magically all the bean properties are exposed via JMX and the methods too! And if you take the instantiation of the platform MBeanServer out, you are left with only a couple of lines!

You are however still left with the task of creating the ObjectName instance — small task, I know, but the constructor throws a MalformedObjectNameException, which presents the inconvenience (when coding around it) of having to wrap it up in try/catch, even though you know for sure the naming used is perfectly valid! So would be good if we can shorten this sequence just a bit more and pass the responsibility of the whole ObjectName creation to a function that handles that too.

It turns out this is possible by using the Registry class. This is a wrapper ultimately for the MBeanServer but offers a few extra features — as to be expected. One of them, is a method which takes an object (instance of your bean you want to JMX) and a name to use and does all the work under the covers:

So if you look at the registerObject() method, you will see that it’s very short — and calls simply just one function on the Registry class:

In fact apart from the call registry.registerComponent(), all the extra code in this function is just to prevent exception from bubbling up the call stack! One line of code for each of your beans to export it to JMX — not bad, huh? And here’s what JConsole reports at the first “breakpoint” — which is after we register 2 sets of beans, one using the MBeanServer method, and one using Registry — the outcome being exactly the  same: 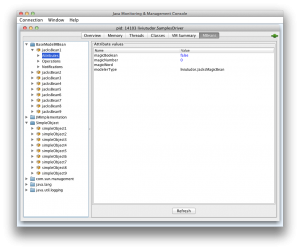 And here’s another feature that I did like in Registry: you can invoke a method on a set of  beans in one go — by calling invoke() and passing it a list of object names! Might not sound like much, but imagine a scenario where you have a plugin-based system: 3rd parties can extend certain classes of yours and at some point you want to ensure all of these plugins get to a certain state — maybe you just want to initialize them, or reset them etc. You can of course build a whole listener/notification mechanism, or you can avoid that, and simply send the notifications in one go via JMX — by calling invoke()!

I’ve only included snippets of code in the post, however, as per usual, here’s the full source code: CommonsModellerSamples.tar.bz2

As per usual, for any comments and suggestions, either leave a comment here or drop me a line.

Warning: Dates in Calendar are closer than they appear. 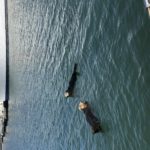