So I started looking a bit closer these days at the Evernote API — another platform alongside Twitter which I like a lot, which is to say it’s basically another platform I find myself writing all sorts of tiny apps around 🙂 From the beginning I find out right away a small problem in their documentation, and while I hurried up to send them a pull request on Github, I’m not sure how quickly their developers are going to react to that, so I thought I’d save some other Evernote enthusiasts some times to dig around by publishing this here as well.

First of all, I’m using the Evernote Java SDK — which is hosted on Github here: https://github.com/evernote/evernote-sdk-java and you can find the JavaDoc here:  http://dev.evernote.com/doc/reference/javadoc/ . Even more, I’m using Maven/Eclipse as my dev environment. As such, I have tried to follow the instructions on the README file on Github — which is where I found the issue.

Their README states that if you use Maven you could simply use something like this in your pom.xml:

So I did ! 🙂 Only to get the dreaded message from maven about dependency not found 🙁

Digging a bit into it, I found out looking in the repo (http://repo1.maven.org/maven2/com/evernote/evernote-api/) that they don’t actually use minor versions for their releases — as such, the above should actually be:

Having made that small change in my pom.xml all worked good from there on.

I’ve forked their repo (here: https://github.com/liviutudor/evernote-sdk-java) and submitted a pull request from there to their repo to reflect these small docco changes (you can see the pull request on their original repo here: https://github.com/evernote/evernote-sdk-java/pull/18) and hopefully they’ll merge it soon and stop this small confusions. However, until Evernote does so hopefully this entry helps all devs out there playing with their Java/Maven SDK.

It is not MY fault that I never learned to accept responsibility. 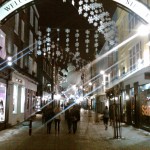