OK, so I’ve decided to blog, amongst all the other stuff I publish on my blog, about some of the experiences I’ve been through or remember from “ole Romania”: the pre-1989, communist, Romania — or RSR (The Socialist Republic of Romania as it was known to us). I’ve realised recently, talking to people “from the West” that a lot of these experiences are absurd and funny to them and people have no idea about some of the things that used to happen in the Eastern Block in Europe. Even more so, they quite likely don’t realise that a lot of these things happen still in countries like China and the likes!

So with that in mind, I’ve set off to reveal some of the things that I remember — having been through all of these and come out (relatively) normal and alive, these all seem funny nowadays; however, these are things which affected entire generations and left an imprint on a lot of lives and destinies. Therefore, as much as the memory of some of these things amuse me nowadays, they are not to be taken lightly!

As a side note, for those of you unaware of the history, Wikipedia has a pretty decent coverage on the Romanian Revolution of 1989 which has overthrown the communist regime. I was 14 when this happened and still remember some of them — enough to blog about them! 🙂

One such thing I remember is the “rationing” of electricity throughout the whole country. The moment I mention “rationing” and “electricity” in the same phrase in the Western world, everyone gets puzzled: “What the heck do you mean???”.

Well, it’s pretty simple: in their (ahem!) infinite wisdom, the commies decided that in order for the country to save money, we need to lower our energy (electricity) consumption. Bear in mind that the country gets a lot of natural gas from Russia (sorry, USSR as it was known at the moment) and I imagine the costs to our neighbours in the East had something to do with that. Bottom line, the message from the commies was very firm: we must lower our electricity consumption!

And since they have control of everything across the country, rather than relying on the good will of the people, they thought of an easier way to enforce this: every day, the local electric distribution networks were asked to shutdown their network and only go “live” and distribute electricity in between certain hours of the day. In other words, throughout the entire country, you had entire periods of complete blackout! Yup, you read it right: blackout!

Simply put, you wake up in the morning and you have a couple of hours of electricity. I’m guessing enough to see to get dressed, shaved and get to work. Then the electricity was cut off — bang, no lights throughout the day. Why would you need it anyway, when you have full daylight, right? 🙂

What about schools, and companies you might ask? Well, the thing is schools and commercial entities where on different circuits, and they stayed on. This, I’m sure, added to the incentive to make your way to work or to school 🙂 If you stayed at home you would be left with no electricity.

Then in the afternoon you get back home and still no electricity — lights used to come on about 7-8pm in the evening — and again only for about 3-4 hours. Coincidentally, the times we had the electricity on in the evening coincided with the hours the (only) TV channel was broadcasting — but I’ll come back to that issue in a different post.

While this might not be a problem in the (long) summer days, where you still have daylight at 8pm, the winters were pretty bad: typically it would get dark around 4-5pm and then you are stuck in the dark till about 8pm when the lights come back on. Of course this meant that most people relied on candles (yup, actual candles — we’re back in the early 1800’s right?) to carry out activities around the home.

This meant that most kids of my generation — and thereabout — saw many dark afternoons and evenings where you’re doing your homework at candle light. Romantic as that might sound, I’m sure if someone pulls some (weird) statistic about that generation, I’m sure it had a huge impact on our eyesight — and I’ll be betting good money on the fact that a lot of “us” (by “us” I mean my generation) wear glasses or had eye corrective surgery (LASIK or the likes).

Of course, we all tried going back to school next day with our homework not done on the basis that the lights were off. The answer was always, always the same one: “Why did you have to wait till the evening? You should have done your homework the moment you arrived back from school, when it was still daylight.” And then the punishment, which varied from school to school and teacher to teacher: detention, calling the parents, failing a test … you get the picture. Point being is that no teacher I’ve ever known ever cared whatsoever about the electricity being cut off — to the point that this was so part of the norm that you couldn’t even mention it as an excuse for anything.

It all changed of course after 1989 — and I can’t really imagine my life nowadays without electricity 24/7 (even when I fall asleep I often have music going on in the background on my phone or radio). However, it seems at the time I was able to adapt — and so did a whole nation. I still laugh when I remember all of this… Then I put my glasses back on, turn on the bedside lamp and go back to my book… 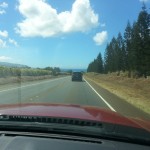