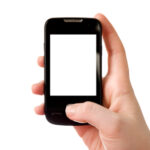 I wrote before about how bad occasionally mobile advertising gets nowadays (see this blog post here). That was about 6 months ago — and I was hoping things started to change in the meanwhile. (After all, in the Valley we hear a lot about how quickly the world changes, right? :D) Well, it appears not — some companies are still stuck in the silly mentality of using in-app advertising to just annoy the hell out of the user until they buy some premium service. And today I had just encounter another case of really really bad advertising.

This one is extremely bad because it’s not just nagware where you get shoved advertising in your face at each step until you pay for a premium service. (And by the way, that in itself makes a really bad case for advertising because it is actually stating upfront to user that “look, we know advertising doesn’t work — soooo not true by the way! — and we don’t really value it either but we know you hate it and we’ll keep shoving it in your face not because we hope you might be interested in the products we advertise, but because we hope you will get so annoyed with it to buy our premium service and get rid of it”. In other words, advertising is not used to trigger user interest in other products or services, but instead just to annoy the s#@$t out of the user.) No, in this particular case advertising actually prevents the user from using the application!

Sadly this refers to the evite app for Android — which I like. I thought so far evite was a good idea, I don’t know what their business model is like (and I’m hoping it’s not just based on annoying adverts preventing the user from using their functionality!) but it’s a great way of setting up events and inviting people, keeping track of who’s coming and so on.

Have a look at the first photo — it’s a screenshot of the evite app looking at the details of an event invite I have received (I’ve blanked out personal details). 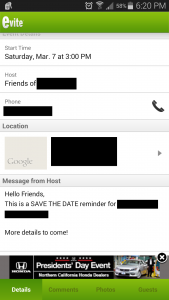 You notice the standard evite screen presenting the details, then there’s the advertising piece at the bottom — I’ve highlighted it in the screenshot below in case you missed it: 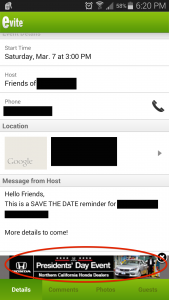 At first glance all is ok — the app is still presenting the event details and also deliver a piece of advertising at the bottom of the screen. Which seems pretty non-intrusive and rather ok.

Having accepted the invite myself and sent the RSVP I then started looking at ways to add this to my calendar: I don’t make a habbit of checking my evite app every day to see what events I’ve RSVP’d to today, I use instead the calendar where I consolidate various events, from various apps. So when I go and check my calendar after I’ve RSVP’d I noticed that this has not been added to my calendar. OK, so this is something the UX people at evite have missed (btw, if anyone from evite is listening this, please add this automatically: if I RSVP to an event I definitely want it added to my calendar). There must be a way to add this to my calendar because I remember doing this in the past!

So I go and look in various screens and settings and still can’t find anything. Until I look again at the screen above and notice that the advert presented has an X marker in the upper-right corner which suggests being able to “close” the ad. So I do it, just in case — and behold:

There’s my “Add to Calendar” button!

Are you kidding me? They use advertising which blocks parts of the user interface and prevents the user from using it???

Shame on you, evite! And to the rest of you mobile advertising (mis)users, please stop doing this — it’s just like shoving popups in visitors faces back in the ’90s when the internet was just taking off. I’d like to keep moving forward in time, not backwards…

Testing can only show the presence of bugs, but not their absence. 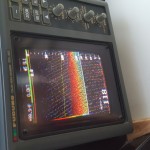