I stumbled upon this potential idea recently, when one of my friends from Romania was over here for a conference. His company was paying for his trip expenses and they put him up in a hotel in Redwood City as it turns out. As you do when you travel, you try and connect with old colleagues and friends who are in the area — so he wanted to come and visit me. Due to work commitments we decided to meet during the week in the evening and he said he’d come over and stay the night. We exchanged addresses and agreed on times etc and then the evening came when he was supposed to turn up. His taxi dropped him to my door as expected but as the conversation started to flow he confessed that the taxi ride was a bit difficult to organize: he had to talk to the concierge who had to look around for local taxi companies (apparently they still exist in the Valley 🙂 ) and then talk to a few (some rather exorbitant as I understand) and finally booked him a taxi. Then the on-board system wouldn’t take his Romanian credit card so they had to go to a cash point and used his (Romanian again) debit card to draw cash and pay the driver. Throw in this a call he got from his Romanian bank in the middle of it all — as they were trying to ensure this wasn’t a fraud — and you got a painful experience.

His problem wasn’t the availability of funds — even more so as all these expenses are picked up by his company — but rather the friction encountered just for a single taxi trip. I asked him why not use Uber and he had no idea what I’m talking about — I’m guessing because Uber’s marketing team is taking the standard “go to market” approach, where you go with USA and Canada first then “level 2 countries” (UK, Ireland, France, Germany and a handful of others selected based on their GDP), and only after all these are sorted they’ll go to smaller (?) markets such as Eastern Europe. As such there is a segment of the market still who cannot use their service or doesn’t even know about it.

Having worked with companies like Fidelio and the likes who operate hotel checkin/checkout solutions and in-room services, I’m surprised Uber hasn’t jumped at the chance to partner with some of them to offer an in-room Uber service! The ideas seems very simple to me: have one account per hotel (and you know the hotel you know the position on the map for your pickup right?) — so that the hotel actually pays for the Uber bill. (The in-room system would know of course to apply that charge to the guest hotel bill, these systems are pretty smart!) So you simply turn on your TV, press the Uber button and go to the reception — your driver will turn up and inform the hotel that the car for your room number is waiting and you’re off. No exchange of money, or trouble with foreign credit cards or any of the kind!

The thing is, we were talking about it and we spent a bit of time exploring the Uber API (we’re both tech geeks after all! :D) and it doesn’t look difficult at all. Just a simple interface on your TV (most of them are Android too so shouldn’t be that difficult) where you just “call” your Uber. The driver name/details is shown and then you just head to the reception. All taken care of by the hotel which then gets a bill with a tag that can be mapped to the room. Really simple methinks… 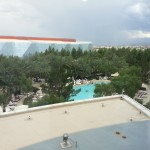