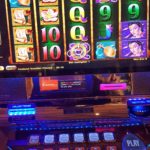 I just got back home from a weekend in Las Vegas, woohoo!!! (OK, that’s not entirely correct, I got back home a couple of nights ago but it took me so long to recover 🙂 Which is why only now have the time to share some thoughts on this trip…

Anyway, I bet a lot. And lost a lot of money as you do in Vegas. But, I have also detected a certain trend that brought me a little bit of luck with the slot machines. Trend which I am planning on sharing here.

But before I do talk about my findings in Vegas, I do have to give a few obligatory disclaimers as you would expect with this field 🙂

First of all I am not trying to advertise gambling here — I find it a fun way to spend time in Vegas but it is not for everyone and you should approach this with care. Secondly, I do not work for any of the betting companies or casinos or anyone in the Las Vegas industry. Also, I do not claim that I have a recipe for “Bringing Down the House” (read the book btw, it’s very good!) — I am simply suggesting that there might be a trend when dealing with some of the slots machines, and “investigating” this appealed to the engineer in me, so I am just publishing the results of my research in this matter. However, any data analyst will tell you that we need way more experiments and way more data to conclude on this — at this moment, this is just a hypothesis, and if you are reading this you can go and add more data to this theory and help confirm it or otherwise.

I do however work in online advertising, and I’ve implemented quite a few advertising solutions where we build on “user data”: that is to say we collect data about users — don’t worry, it’s not PII — and we find out their likes and dislikes and assign scores to these. That means that if we end up finding if a user for instance is more interested in movies but not interested in cars, then he or she will receive more and more movie-focused advertising messages, because quite simply they are statistically more likely to interact with those adverts and generate more revenue for the advertisers. (Which is what advertising’s main aim is, really.)

This is called “user profiling”: tracking user activities we build a “profile” for a user and use this to predict what the user’s next likely “move” would be — in advertising that means which advert unit is the user more likely to interact with. To build the user profile, we cookie typically the user and every time we see that cookie we can map it to a certain user profile, and then we can use that user profile to perform estimations as to user next action.

Now it is this user profiling that I am going to draw a parallel with, but this time in the world of Las Vegas 🙂

In brief, this is what made me think of this — and again, I have no idea if the casinos actually do this, but my initial “data” on this suggested this as a hypothesis: while in Las Vegas, I would go to a slots machine present my 20 dollars note, order a drink (gotta love the “free” drinks in Vegas! 😉 ) and start playing. I would go through ups and downs to the point where invariably I would decide that this machine has either lost or given me enough, then hit the “Cash out” button then take my ticket to another slots machine where I start the whole thing all over again.

It is perhaps by accident that I found out that instead of taking my ticket to another machine I get slightly better odds if instead I keep the ticket from the previous machine and use instead a fresh $20 note. (As I said, this could well have been just sheer coincidence — and, again, this is just a hypothesis!) So I started this experiment as follows:

I have done this on a few machines and I would cash out each time when I hit around $25 (as I said from the beginning, you will not bring down the house with this, if my theory prove correct — well, at least not if you’re betting small amounts like I do). I would then take all the tickets to the ATM, cash them out and take the fresh $20 notes received back to the slots machines where I would start again 🙂

This I have figured out — perhaps coincidentally — that it gave me better odds of winning.

So that’s when I drew the parallel with the user profiling: when I cash out, I get a ticket with a whole barcode on it, quite likely this is a ticket ID of some sort, and in the casino database this is now marked as being worth X dollars. Once I take this ticket to another slot machine, the system will retrieve the details based on the ticket ID and confirm the value for it so I can start playing again. However, at this point, the new slots machine quite likely “knows” what was the previous slot machine I played on (the machine that printed the ticket in the first place) and perhaps a whole set of data regarding how did my session go at the last slots machine. So it can make a lot of predictions probably on when am I likely to double down, to slow down my betting and a lot more. Then later on, when I decide to leave this slots machine too and cash out — I will be handed a new ticket, with a new ID barcode’d on it; but also now the system knows that second ticket and first ticket refer to the same user : me! And the same system now has more data about me and can learn and predict probably better my style of play.

Now if the system has predefined odds in — let’s say that the casino decides that overall only 30% of the spins should result in a win — then they can based on this filter this down to the user level: such that each user individually gets only 30% of spins which result in a winning “hand”. (Of course, there is still an element of random behaviour from me as they can’t predict that precisely how much I will bet on this hand and a whole set of other coordinates.) But if they do this, then the system can still generate spins randomly but control the random a bit more carefully — after all how many people did you hear of in one night to go and win let’s say $100k then go on to another machine to later on win say another $10k?

So I hypothesize here that perhaps casinos use these tickets as a way to build a user profile about me and then use this profile to decide betting odds at each spin.

Now, by not using the ticket from one machine on another machine I am short-circuiting this a bit: when I present a $20 the system doesn’t have any data about me, so it will not be able to predict that easily when I will bet more or when I will slow down for once. Also they will not know what my win or lose rate has been before so they can’t compute a lower winning probability for me if I won previously — and instead will play a “default” computed win rate, which I would argue overall is higher than if you won at previous machines (in which case they have to decrease it).

Based on my few “experiments” with this, as I said, I found the winning odds to be better if I use the cash than if I use the ticket from the machines. And that triggered my above theory 🙂

However, to throw a spanner in the works here: what if the casinos start (if they are not doing it already) tracking the serial numbers of the notes? 🙂 At that point cashing a ticket in at the ATM won’t work — d’oh 🙂 But until then feel free to test this theory and drop me a line to let me know if you came to the same findings or otherwise. Good luck, after all this is Vegas and the house always wins 🙂

I've got Parkinson's disease. And he's got mine. 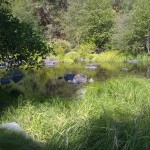