If you are concerned with the usability of your site, you probably keep an eye like everyone else on Dr. Jakob Nielsen‘s site useit.com. While I agree with (most of) his views, there is one aspect that I do not agree with entirely: advertising. If you read his article “Advertising Doesn’t Work on the Web“, you will be told that with very few exceptions, web-based advertising doesn’t work. Well, I beg to differ!

I do work for an oline media company, and I can safely say that there is a lot of money in this industry — and a lot of money are made by not just the advertisers, but the publishers and the media company as well. (Incidently the company’s Christmas party was in Bermuda and all employees were flown there and stayed in a 5-star hotel for 3 days — pictures here. Even that alone in itself is a proof for the fact that web-based advertising works, I would venture to say!)

While I appreciate that the article was written in 1997 (when advertising was mostly based on banners), there doesn’t seem to be a recent addendum to it, so I gather that Dr. Nielsen’s opinions regarding this subject are still the same. And there have been a lot of changes in the web-advertising arena lately — most importantly the contextual advertising!

I am pretty sure that even Dr. Nielsen himself will agree that on his pages where he mentions ideas that were discussed at the most recent User Experience Conference, a link/banner/ad taking the reader to a page where she or he can make a booking for this conference would actually be quite beneficial! As it is in fact in context with the contents of his article. Because of that, the user will not see it as a “forced intrusion” in his/her web experience, on the contrary, the user will actually be quite likely to click on the ad and make a booking for the above-mentioned event, as it is in fact quite likely something that presents interest to him/her. So from a user perspective, the actual ad would prove to be beneficial. From the advertiser’s perspective, the ad is targeted and delivered to the right audience — readers who are interested in usability issues and who are very likely to be interested in attending such event. Therefore the conversion ratio for the clicks on this ad will be quite high, in other words, users who click on the ad will make a booking in most cases — so no money is wasted (as Dr. Nielsen’s article claims it). Last but not least, from a publisher (site) point of view, a certain revenue will be driven from this advertising, due to the clicks made on this ad. So the 3 parties involved in this scenario do actually benefit from the presence of the advert on the page! And the scenario can be taken even further such that for instance a link to a book discussing issues that Dr. Nielsen lays out in his article can be presented on the page too — with (very likely) the same rate of success. Or maybe a link to downloading a piece of software that validates a site layout. Or a link to an audio-book. And the list can go on…

I agree though that an advert inviting users to buy tickets to the latest Shakira concert would be nothing short of annoying in the context of his usability site. And in fact, in such cases the advertiser would not be happy at all by the fact that his advertising campaign has been targeted to the wrong auditory — and quite likely not be prepared to pay (or pay very little) for trafficking his campaign on such pages! And I also agree that a site overloaded with ads (have you seen the “site” http://www.shopping.net ?) is of very little use to an user which will be struggling to separate the real contents from the advertising.

However, I would like to find out what Jakob’s opinion nowadays is regarding the contextual advertising which is so widely spread nowadays (and you only have to look at Vibrant Media‘s IntelliTXT, Google’s AdSense, Yahoo Sponsored Links and so on).

How do you pronounce my name? With reverence. 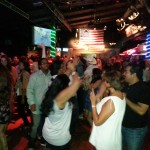