This has just happened to me for real recently and I thought it more than deserves a blog entry.

I am used to receiving (quite often irrelevant) regular job offers/notifications from various agency who had my CV years ago and as such still have my CV in their database and include me on their regular job emails. Occasionally I do look at some of them if they sound interesting — after all, who knows, the next big thing might be in one of these emails. I do get though as I said quite a lot of them which are totally irrelevant to me — these typically include some contract work in the likes of Luxembourg, Spain, France, Netherlands etc — since I’m not interested in these I just scan the subject of the email quickly and if it fits into one of these categories I’ll just delete it straight away.

This is how I spotted this email received from a recruiter recently — it had one of these subject lines (as you can see in the screenshot) containing “Contract…” and the name of another country. I was just about to delete it when something in my brain told me this didn’t look right. I looked at the subject again and I realised: the contract work was allegedely in … CZECHOSLOVAKIA!!!! I had to open the email just to verify that it’s not actually just a spam message — with a message body that has nothing to do with the subject line and nope, the dude who sent me the email was in fact trying to sell me a contract position in Czechoslovakia! The country name is mentioned in clear in the email: 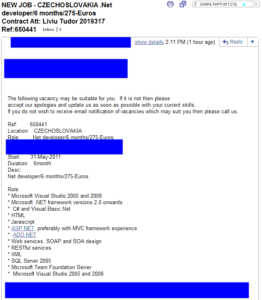 I thought it’s best if I blank out the name of the agency and the recruiter name — for those of you though who are into their Photoshop — here‘s the original screenshot which if you find your ways around Photoshop can process to remove the blue bars above and see who, where and how 🙂

You got to admit this is a pretty rare type of idiotic email, with that country so long gone! All I can say is that I’m waiting now for emails from him with job offers in:

The more it stays the same, the less it changes. 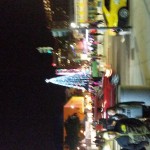