How come that (nearly) every single hotel / guest house / B & B nowadays displays a little note in the shower regarding “caring for the environment”? The note is pretty standard and asks guests for support in protecting the environment to the extent of re-using the towels if possible for an extra day so that the hotel won’t have to use detergent which then ultimately ends up in the sea. At first glance it might look to the untrained eye like a decent request; however, I dare challenging the truth behind this note: is it really the environment the hotel cares about or are they more concerned about their expenditure on water, electricity and detergent — all of these being used to wash the guests’ towels.

I mean, imagine a smallish hotel with 20 rooms; every day you can argue (for the periods of full occupancy) that the hotel has to wash at least 20 towels. (The truth is they would have to wash in fact 40 as there’s 2 towels per guest at least, and if you take into consideration things like double or twin rooms then you would have to double again that number so you end up with abotu 80 towels a day.) If all the guests chose to have their towels washed every other day (rather than each day), arguebly this would half the hotels expenditure for washing the towels each month. So the £200 a month (probably) becomes £100 per month. And so you simply save over 1000 per year without actually lifting a finger.

If you also take into consideration the fact that based on having to start the washing machine only every other day you could get rid of your normal staff and employ part-time staff, you would probably add another 5K a year on top of the previous savings. So about 6K saved straight-away. And the ones to pay for this saving are the guests on one hand and the poor guy who has to give up half of his/her shifts (and salary!) in doing the laundry!

But hey, they looove the environment and it’s all for a good cause, right? 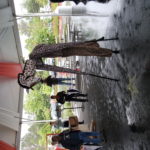