This morning on the way to Heathrow I couldn’t help overhearing a conversation going on in between 2 (what they thought they were) “proper Londoners” about the “invasion of Eastern Europe”. It went upon the lines of how these bloody Czech, Hungarian, Polish and Romanian came and took over London and that’s not right. Coincidentally, I was heading to Heathrow to catch a flight to Bucharest. (To all of you mothertruckers out there who don’t know this, that is the capital of Romania – which by the way it is not to be confused with Budapest, as that’s aaaaaall the way in Hungary ok?) Anyway, I felt compelled to listen to the conversation going on and having reached Heathrow, checked in, security done and all that comes with it, I feel I need to clarify once and for all a few facts about Eastern Europe. To be more precise, one thing that I want to make absolutely clear is the geographical positioning of Eastern Europe! Because it transpired to me that really the term “Eastern Europe” has actually lost its actual meaning in favour of “the shite part of Europe”.

So let’s start by looking at what does “Eastern” mean really? Normally, given a territory (city, country, continent, it’s really irrelevant), when it comes to marking the eastern, western, northern and southern parts, one would normally imagine the mentioned territory section in 3 equal segments – horizontally for East/West and vertically for North/South. In the case of the East/West, you start from the left with the western region, the central one in the middle and to the right you got the eastern part (as you face the map). When it comes to North/South, starting from the top (as you face the map) you got your northern region, the central one then the southern one. Simple, right? 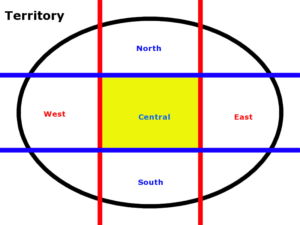 Don’t think I could make this more simple than it is. The key thing to remember though (for the purpose of this blog post at least!) is that we all divide the territory into 3 equal parts.

Now let’s look at a map of Europe – I have intentionally wiped out the names of the countries and cities; the reason being that in most cases people will be able to recognize about 2-3 countries on a map like this, and as such there will be less a priori decision made in their head as to where Western and Eastern Europe start and finish. So let’s apply the same delimination (West, Centre and East) to the map of Europe – and we get this:

If I assure you that I haven’t missed out any European countries from the above diagram, would you agree this is a fair delimination for West and East? My drawing skills might not be perfect, as such the lines might be a couple of pixels to the left or right but I would venture to state that this is accurate with an error margin of about 5% (probably less, but I’m feeling generous 🙂

And if you agree with the above then let’s reveal which is which here:

Well, well, well, what have we got here? Can we call Czech people Eastern European? Well, not unless we apply the same treatment to Austrians… and Italians… and Germans… (May I remind you what happened last time we pissed those 3 off? :D) Same goes for Slovenia and Croatia.

Then we have a few special cases: Poland is a Central European country – I hope we can all agree on that! – yet it’s half in Eastern Europe as well according to my diagram. Since it is half and half though almost (and it’s a bloody great territory by the way!) we can’t really classify it either way can we? Some would argue Central Europe is more appropriate for Poland – and arguably because of the Central European influences to the country which spread from the West all the way to Eastern part, this should be Central Europe. One thing is for sure, if the likes of Hungary is almost accepted as being part of Central Europe (remember the Austro-Hungarian empire? And see above, you don’t want to piss off the Austrians – so stick to “Hungary is Central Europe”!), then Poland (which spans East pretty much as far as Hungary does) is a Central European country too. Slovakia is an interesting one – part of the ex-Czechoslovakia, nowadays is a republic on its own (part of the EU and all that), however, that IS indeed an Eastern European country. (Do NOT confuse with Slovenia, which is right under Austria and as such pretty central!)

We have the “usual suspects” as far as Joe Bloggs is concerned when it comes to Eastern Europe: Romania, Bulgaria, Ukraine, Lithuania, Latvia, Estonia… Finland! Ooops, come again? What’s Finland doing in Eastern Europe? Well simply put : “cause it is!”. I know for your average ignorant mothertrucker, the whole Finland + Sweden + Norway (by the way, they are NOT in the EU!!!) + Denmark + Iceland (???? don’t ask!) gets assimilated into “Scandinavia” and that’s typically “somewhere up there” – associated with ice snow and Father Christmas, but Finland is in Eastern Europe. So next time you have a shot of Finlandia vodka, if you are adverse to Eastern Europe spit it right back! And here’s another surprise: Greece! How many holidays did you have in Greece? Crete? Santorini? Do all of these ring a bell? I know normally Greece and Spain and Portugal make this hazy area “down there” where it’s always sunny – but did you have a look at all on the map to find out that Greece is just south of Romania (which is as Eastern Europe as it comes)?

And since we’re touching on this, when we refer to the Western World (meaning in fact “Western Europe”), do you know you only include half of France really and Germany gets totally left out? Though you do include ultimately Portugal, Spain, UK and Ireland and Iceland!

Oh and last but not least, Switzerland IS in Europe, that’s correct – Central Europe to be more precise! But no, they are NOT in the EU (I doubt it they will ever be!) – and by no means do they use the euro you dumbass mothertrucker: it’s a swiss franc!

One Response to “Eastern Europe to the Untrained (Read “Ignorant”) Eye”

Someone asked me recently - what would I rather give up, food or sex. Neither! I'm not falling for that one again, wife. 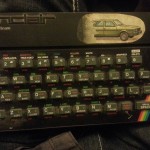