I’m not going to go on about where can you buy and how much, a simple search in Google or Amazon will show you; I’m not going to praise or criticize its features either — there’s enough blogs about this already. The reason behind this post is to shed some light into the problem I had trying to set it up with my Samsung Galaxy S3 phone — at the time googling around for the errors I was faced with didn’t render much 🙁

Part of the initial setup of the watch (apart from charging it up and turning it on :D) is to install on the phone the Gear Manager. Samsung makes this easy by simply using NFC and touching the watch’s charging case on the back of the phone — which triggers the action of opening the Samsung App Store and installing automatically the Gear Manager app. This is where I hit a brick wall right away!

I suspect that users of the Galaxy S4 phone might not have this issue, however, for S3 users this is still possibly valid: the problem I got is that upon touching the case on the back of the phone, I’d get this error on the phone: “Product does not exist in this store (4002)”. In other words, the Samsung App Store would open up and right away show this prompt then nothing would happen. I proceeded to actually manually search for the application “Gear Manager” (and variations of the name) in the Samsung Store as well as the Google Play Store — and it rendered nothing! 🙁

As I said, searching for this error at the time didn’t render anything about Galaxy Gear itself or the Gear Manager app — I’d mostly get some forum posts to do with other apps, and a whole lot of reviews about the watch itself.

Having spent some time on this and tried all sorts (rebooting, pairing the devices via Bluetooth and so on), in the end I’ve identified the issue: my Android version needed updating! For whatever reason, the Samsung Kies app didn’t prompt me that there was an update available for my phone, and as such I was running some slightly older version of Android. I’ve applied the update, so now I’m running the following (see screenshot below too): 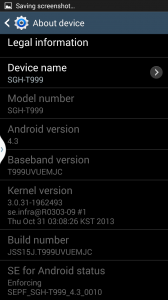 Having upgraded the phone then all the apps, restarted everything, finally touching the case on the back of the phone worked and it installed the Gear Manager app — and from there on everything went smoothly, woohoo!!!

So if you face the same issues, have Kies check for an Android OS update and install it then you should be fine.

There once was a man from Darjeeling
Who got on a bus bound for Ealing
It said on the door
"Please don't spit on the floor"
So he carefully spat on the ceiling. 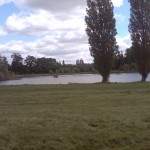