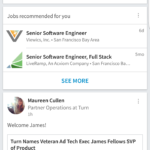 I just saw this the other day on LinkedIn — a set of 2 job openings targeted at me. Nothing unusual, LinkedIn does a good job at targeting jobs at their users (it is in fact due to LinkedIn I ended up at Netflix, via a very similar targeted job ad).

However, there is something about this particular combination that made it interesting enough to warrant a (small) post here. My initial “understanding” of the messaging (and I wasn’t paying attention to the ad like most users who have developed “advertising blind spots”) was that one company advertised 2 openings. My brain subconsciously scanned the ad and decided that it’s the same company; it also somehow made the decision for me that there was nothing interesting about this company to warrant my attention… So I scrolled on.

It was only later on I’ve realised that in fact this is NOT the same company, it’s in fact 2 separate openings at 2 separate companies. The reason behind it is that their logos are triangular-ish and look very similar: 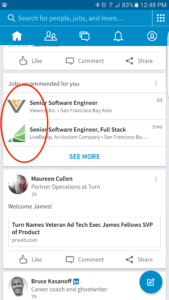 As such, sadly for the second company, it never got a chance to pass any (subliminal or otherwise) message to my brain as its ad got discarded before it got “parsed”.

The case to be made here about managing advertising inventory — and maybe this lies with LinkedIn rather than the advertiser (the company with a job opening) — is that the ads/jobs opening system needs some mechanism for exclusions built in: such that you don’t advertise next to companies that can steal your spotlight. And this “stealing” can be achieved by simply having a similar logo to yours — or perhaps the mechanism can be more complex than that (I can imagine cases where you don’t want to advertise jobs next to more senior jobs than the one you offer — the user will be drawn to the more senior position and might ignore yours, etc).

Note to other advertisers on LinkedIn — and to LinkedIn itself I guess: build a better tool for filtering and managing your advertising inventory for jobs.

Originality is the art of concealing your sources. 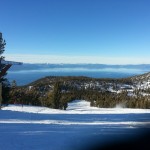