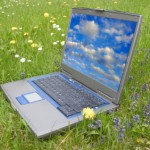 Not long ago, Magnetic, the company I work for, released their whitepaper on ad viewability so I thought it necessary to share my thoughts on this rather new concept, which seems to be either misunderstood or completely missed by a lot of companies still.

First of all, the whitepaper released by Magnetic and to which I’m referring throughout this post can be downloaded here: http://go.magnetic.com/viewabilitywhitepaper — while I will include a few excerpts from it, I strongly suggest you go and download it and read it yourself. Secondly, while the whitepaper was released by Magnetic it’s worth noticing that this is not a whitepaper meant to push in your face Magnetic’s advertising solution (though it’s a great one, btw!), instead it’s meant to educate the public on ad viewability.

Imagine this scenario: you book an advertising campaign with an agency or whatever provider you use. The volume is great, the price is right and since it’s a brand advertising campaign you go with a CPM model. You check the targeting and figure out the inventory looks great so you go with it. Then you see your ad appearing on sites you wanted to, the audience targeting is great — and you’re happy! Then a few days into it you start looking at various other measures, like click-throughs and conversions and realize these are dead low to pretty much non-existing! What gives?

You go and balance again the impression you have trafficked so far, and including all beacons and any other 3rd party tracking you might have done, all looks great! There are no discrepancies and you are guaranteed that the number you see are the number of ads your campaign has served. Still though, no conversions and no clicks! You engange your team in a witch hunt pretty much where you go and visit the websites your inventory is spread across trying to figure out any potential errors perhaps in trafficking it — and it’s during this that someone in your team comes up with the classic: “Oh, they are trafficking our banners now at the bottom of the page!”

And finally it makes sense: your ads are still the same, the websites are still the same, the only thing now is the positioning — your banners appear at the bottom of the page, which means the user has to scroll down to see them (who does that? 🙂 ) and in other words, even though the ad server has served your ad, it is not visible by the user and as such there’s little chance you’ll see a click on it! And that’s when “ad viewability” hits you!

The link I attached above from Wikipedia, gives a bit of an insight into it: “A viewable impression is a metric of ads which were actually viewable when served (in part, entirely or based on other conditional parameters)”. This suggests that part of an ad has to be visible for an impression to be counted as a viewable impression — but how much is enough?

In the light of that, the amount of suspicious traffic (as reported by Solve Media) in 2013 begins to make sense: 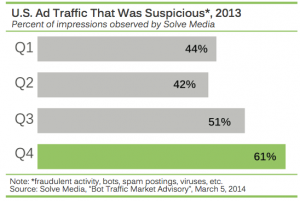 It’s probably not the fact that the traffic was suspicious but instead ads were observed which didn’t get clicked on or interacted with exactly because of the ad viewability issue! That number must be gone down now, as in March 2014 as I understand, the MRC (Media Rating Council) has lifted its Viewable Impression Advisory for Display Advertising thus allowing publishers to begin selling advertising based on standards for viewable ad impressions.

This means that now we will see more and more ad exchanges taking that into account during their bid process — I suspect it will be a ramping up process as not all web properties will have that available right away. But guarantee this will drive the impression prices up — however, if you bid on a property with an 80% viewability then you are nearly guaranteed that this will be viewed by the user — lower that threshold to 40% and it simply means more often than not users will NOT see your ad (read “wasted money”).

Also, most of the traffic nowadays as we know is RTB-based so I suspect this will add to the inertia — before ad viewability becomes a standard. (Do you know how tough it is to change an algorithm which sees billions of ads going through it daily?) However, this will soon be come a de-facto standard in targeting. And yes, there are still grey areas to explore still (ads showed inside iframes, browser resizing after the ad has been shown and so on) — but even so, it’s time we start seriously thinking about how many of your ads are actually being seen? And if they are not seen, do you need to pay for them?

Only Robinson Crusoe had everything done by Friday. 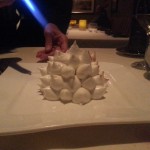